Happy Holi (A festival of Colours) to all TechBrij’s readers.

The world’s Lathmar Holi of Braj has its own identity but also the colors of Bikaner in Rajasthan has fun, frolic with the particular style. The festival of Holi means not only with water balloons, pichhkaris or water guns, gulaal, bhang and mithai but also mutual love and unity in society.

Being Bikaneri, I like splash of Rammat, playing Tambourine and listening traditional bhajans. Bikaner’s traditions and customs of the common opinion deeply connects each other and makes a unity. During Holi in Bikaner, a group of persons belonging different casts dancing, singing, playing tambourine in various places out is to create an atmosphere of fun. Bikaneri Holi has their own glorious history, culture and tradition which still followed by people. Bikaneri holi has different colors and all Bikaneri spread all over india come their home town to enjoy the color of Holi. 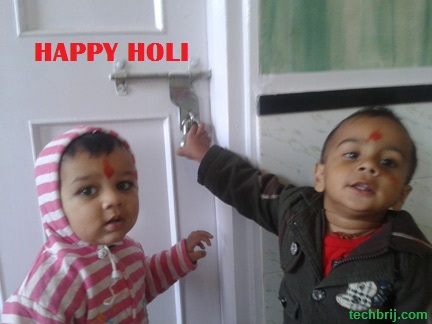 In above picture, Both are my nephews and one year olds.